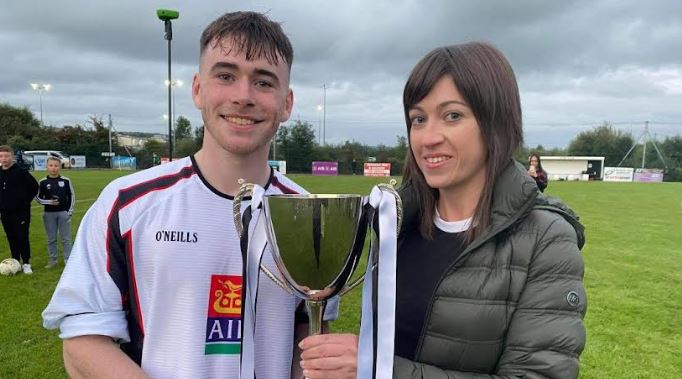 Rovers went into the game knowing a win would secure the title--having won their previous eight games- and were very slow out of the blocks with Bonagee dominating all over the pitch in the opening twenty minutes with Niall McCrossan and Adam Murphy particularly lively for the visitors.

Rovers took the lead against the run of play on 22 minutes when after a foul on Nathan Plumb in the area, Jack Dwyer netted with a retaken penalty as encroachment had ruled out his initial rebounded effort after Bonagee goalkeeper Matthew Gibson had saved the first penalty.

The goal was no more than Bonagee deserved and they were in dreamland just minutes into the second half when Gallagher scored with his free kick somehow squirming past de Costa.

Letterkenny though started to play their most enterprising football after that concession and crucially got back level on 55 minutes when James Barlow Gallaghers flick-on fell to Sam Harvey and his effort appeared to have crossed the line with Brandon Ndlovu making sure.

Rovers then took the lead on 71 minutes when Max Johnston making a huge impact as a sub fired home from an acute angle before it was Johnston who finished superbly on 80 minutes after the best move of the match involving Plumb, Adam Yisau and Jack Dwyer.

Bonagee though bounced back and got another penalty on 87 when James Lenty Gallagher again netted but Rovers saw the game out well to lift the Dick Duffy Memorial League trophy which was presented to captain Leon Doherty by Ciara Duffy.