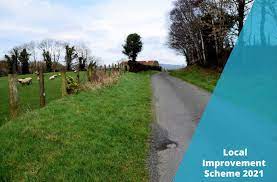 A Donegal Councillor is calling for the current Local Improvement Scheme to be scrapped, and replaced with an alternative that would better suit the needs of local Ireland.

However, Cllr Micheal Cholm Mac Giolla Easbuig says at current LIS allocation rates, it would take Donegal County Council 30 years to process and follow-through on all the requests they currently have for improvements to non-national roads, even without any new applications.

Cllr Mac Giolla Easbuig says the current scheme does not come anywhere near what is required...