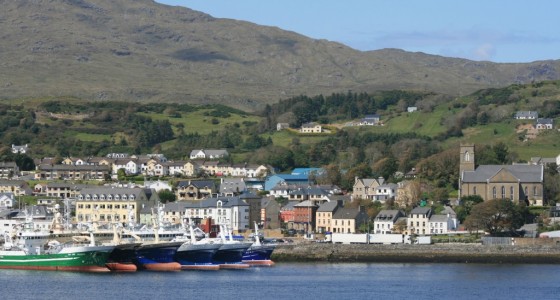 Agriculture and Marine Minister Charlie McConalogue has announced that he embark on a tour of the country in the coming months to visit ports and harbours and meet with fishers and coastal communities.

Minister McConalogue was speaking as he offered to meet with representatives of the fishing organisations who brought a flotilla of trawlers up the Liffey to the Convention Centre this morning.

Minister Mc Conalogue says he is pursuing every opportunity at EU level to increase the available quotas for the fishing fleet.

That was echoed in the Dail this afternoon by Taoiseach Michael Martin, who was responding to a question from Donegal Deputy Padraig MacLochlainn.............

The Minister and the Government fully understands and appreciates that the impact of Brexit on Ireland’s seafood sector and the coastal communities dependent on it, is a major concern. On Monday, an Taoiseach and the Minister met with fishing industry representative groups to discuss some of the current issues and challenges facing the sector.  Both the Taoiseach and Minister welcomed the positive engagement and open dialogue with industry and took the opportunity to re-affirm the Government’s commitment  to support a sustainable seafood sector that provides for our coastal communities. This engagement followed an Taoiseach’s visit to Castletownbere and Union Hall recently, the Minister’s series of Virtual Townhalls for Coastal Communities and a recent three hour debate in an Dáil on fishing.  The Minister has offered to meet the Producer Organisations and industry representatives today, on behalf of the Government, to receive a letter from those involved in the protest event. He has also announced that he will visit ports and harbours and meet with fishers and coastal communities on a tour of Ireland over the coming months.

On the flotilla today and in advance of his meeting with the fishing organisations, the Minister commented “The Government and I stand with our fishers and we continue to welcome all engagement with fishers, their representatives and with coastal communities, I welcome fisher representatives to the Department today to hear their concerns in person. I recently met with coastal communities on a series of Virtual Townhalls. Now, in line with COVID-19 restrictions, I look forward to meeting with fishers and coastal communities in person at their ports and harbours. We recognise the challenges facing the industry as result of Brexit and the pandemic and I have established the Seafood Sector Task Force to report to me on the future of the industry.”

The Minister set up the Seafood Sector Task Force in March to examine the implications for the Irish Fishing industry and coastal communities particularly dependent upon it arising from the EU/UK  Trade and Cooperation Agreement.  The Task Force involving representatives of the seafood sector and coastal communities dependent on fishing under the guidance of the steering group (Aidan Cotter, Margaret Daly and Micheál O’Cinneide) submitted an interim Report to the Minister last week which recommended a range of  actions that may be pursued to assist in reducing the burden on Ireland from the transfers of fishing quota shares to the UK and a  voluntary tie-up scheme for whitefish vessels impacted by the quota reductions at the latter part of the year.  The Seafood Sector Task will continue its work with a view to producing a final report for submission to the Minister to recommend a range of actions and initiatives for those directly impacted by the TCA and outline other developmental strategies to strengthen and enhance coastal communities especially dependent on the seafood industry.

The Minister is pursuing every opportunity at EU level to increase the available quotas for our fishing fleet. The Minister and the Government will continue to keep the focus on the disproportionate quota reductions for Ireland and In line with the recommendations of the Task Force  Interim report is  using any opportunity available to seek constructive solutions that would help to alleviate this unacceptable position.  The Minister is working on progressing the recommendation for a tie-up scheme and seeking the required EU State Aid approval and the EU funding under the EU Brexit Adjustment Reserve fund.