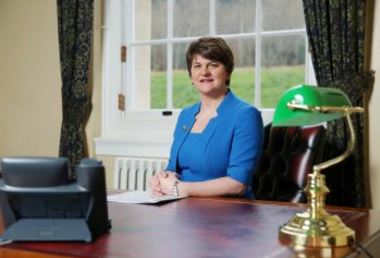 Arlene Foster is expected to officially step down as First Minister of Northern Ireland this week - possibly today.

It comes as a political crisis looms at Stormont between the two main parties - Sinn Fein and the DUP.

Arlene Foster announced her resignation as both First Minister and leader of the DUP at the end of April - following an internal revolt within her party.

Edwin Poots has since replaced her as party leader - and has nominated Paul Givan as his selection for First Minister.

When she formally resigns - Deputy First Minister Michelle O'Neill will be removed from her position automatically - and the two parties have 7 days to renominate ministers.

However, yesterday a senior Sinn Fein source said it was their assessment that Edwin Poots has been acting in bad faith - when talking about delivering an irish language act.*

They also said the nominations for the top posts have to be accompanied by the progression of such legislation.

With Stormont only being able to function if both positions are filled - this latest statement doesn't bode well for the future of power sharing.