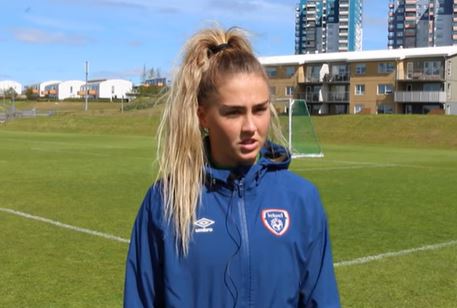 The Glasgow City attacker started in the 3-2 friendly loss to Iceland last Friday and was met with a flood of messages from family members upon switching her phone on after the game.

Colvill qualifies through her Donegal-born Grandmother Bernadette Barrett, while her mother, Siobhan, has always kept the Irish flame burning in their household and brought the now 20-year-old on her first trip to the family 'home' when she was 14 years of age.

"I feel really honoured. It's really good to represent that half of the family. My whole Mum's side of the family are from Ireland and reside in Donegal now," Colvill told FAI TV.

"I got to spend three months there last year in lockdown. Growing up in Cairns, we had a really good Irish and Scottish community that my Mum was friends with, so I always had that connection.

"My Nanna and Granda were watching and all my that side of the family so I think it was something really special for them, and also my Mum as well was really proud."

Born in Cairns, Queensland, Colvill grew up fully aware of her Irish roots but her first introduction to international was with Australia when the then Canberra United player was included in a squad for the 2019 AFC Under-19 Women's Championship qualifiers.

The powerful forward featured in two games during that series before her career went in a different direction. An offer to move to Europe, to join Scottish Women's Premier League champions Glasgow, was a gateway to a professional career, so she jumped at it.

Colvill left behind her International Relations studies at Sydney University and all of her childhood friends to embrace the challenge of making it at Glasgow. And it has been a case of so far, so good with a League winners' medal secured earlier this month on top of playing in the quarter-finals of the UEFA Women's Champions League.

The Irish contingent at Glasgow has helped her to settle in quickly and she has become close with fellow striker Clare Shine and midfielder Niamh Farrelly. But she knows that adding to her first senior international cap won't be about being popular but impressing Ireland Manager Vera Pauw.

"The competition for places in the squad is something else. There are so many good players here. I just want to work hard and do what I can do to get into the team, but I've really enjoyed it so far," said Colvill.

"It has been really good to get some international experience with the World Cup qualifiers coming up. it was good to come in and meet all of the girls and get a few games under our belt before those big games."

As is now a team tradition for debutants under Pauw, Colvill was presented with the official match pennant to have a special memento from that Iceland game, although she will be hoping to make more memories as the teams meet again on Tuesday in Reykjavik.