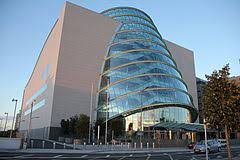 Gardai have confirmed that the car park at the Convention Centre in Dublin is part of a designated security zone on days of Dail sittings.

It comes as people attending the Mica demonstration in Dublin on Tuesday had their parking spaces at the Convention Centre cancelled.

Thousands of people are to travel to Dublin on Tuesday to take part in a demonstration for a 100% Mica redress scheme.

Gardai say the car park is restricted on days when the Dail is in session at the Convention Centre.