Today marks the 30th anniversary of the murder of Donegal Cllr Eddie Fullerton.

In 1979, he had become the first Sinn Fein member to be elected to Donegal County Council. 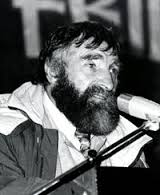 Sinn Fein President Mary Lou McDonald has called for a public inquiry into the circumstances of his death.

Maria Doherty has been coordinating a series of commemorative events..........