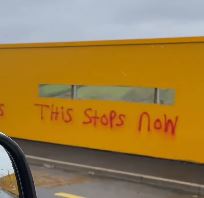 A large crowd has gathered outside a construction site in Carndonagh as mica-affected homeowners stage a protest.

A spokesperson for the protestors claimed the contractors on the site are sourcing blocks from a company which previously provided mica affected blocks in Inishowen and elsewhere in Donegal.

At the weekend, graffiti emerged on fencing around the site, calling for a boycott of the block suppliers.