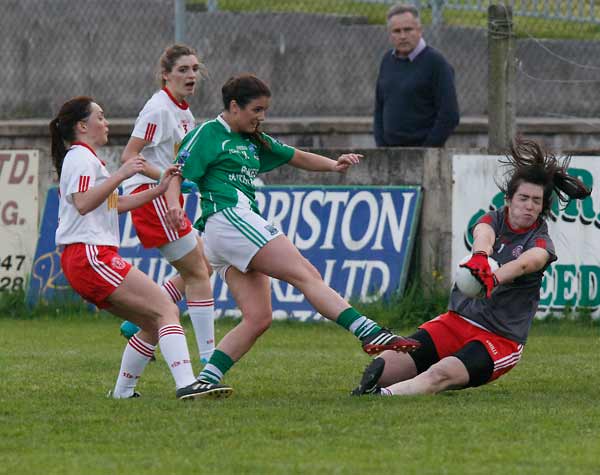 Shannon Lynch has ended her inter county career with Tyrone. The 28 year old goalkeeper confirmed what she described as “a heart-breaking decision” on the eve of Tyrone’s return to training and the start of a new season.

The Castlederg player will continue to play a leading role for her club side Castlederg where of course she plays at centre field and coaches youngsters. Shannon confirmed her intention to step aside to new manager Kevin Mc Crystal at the beginning of this week after a tough weekend of soul searching, however work commitments meant she could not offer Tyrone as much commitment she wanted to give.

Quiet and unassuming off the park, she done her talking on it as many a Tyrone defender would testify. She controlled the defence, cajoled them and indeed bereted them on occasions, but always assured between the sticks, she grew into the position from 2010 despite being on the wrong side of some tough outings.

Manager Mc Crystal who has spent the week running the rule of his squad admitted he was saddened by the news,

“It’s a sad day for Tyrone ladies football, Shannon has been a stalwart figure for the seniors, a great servant,” he confirmed, going on to say they had tried to work ways that she would remain, “ I fully understand her work commitments will be a big demand on her this year, we tried several options to ensure she would still be able to play but Shannon is an honest girl she wanted to give her all and I have to respect that, she felt if she couldn’t give a 100% there was no point, the door will always be open to her and I know we will all miss her”