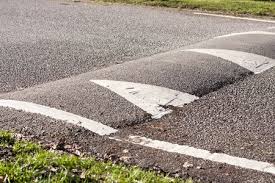 Long awaited traffic calming measures at a problematic area of the Twin Towns have now been completed.

Upper Drumboe road is a heavily populated area and also home to Finn Valley College and there had been concerns over the route being used as a shortcut around the town and the speed some of the motorists were travelling.

Donegal County Council initiated works in recent months with a series of ramps now installed along the stretch.

Local Cllr Patrick McGowan says there was a big campaign locally to get this project over the line and its hugely positive that its finally finished: