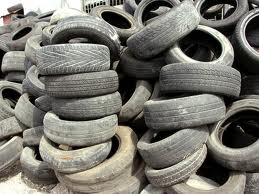 An investigation is continuing into the discovery of a major tyre dump near Barnesmore Gap.

The dump consists of a large number of used car and lorry tyres, dotted across the scenic area.

It's estimated that one pile alone contains around 1,000 tyres.

Donegal County Council is carrying out an investigation into the large scale dumping and anyone with information is being urged to contact them.

Local Cllr Martin Harley says a lot of work has been undertaken by the Council to discourage this type of illegal behaviour, and described the situation is regrettable: