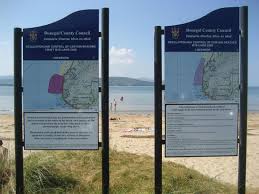 The Cathaoirleach of Donegal County Council is calling on the EPA to restore the blue flag to Lisfannon beach in south Inishowen.

The blue flag is awarded to a particular beach for high water quality and while the beach boasted the accolade in years previous, it lost the status in 2017 because it didn't meet the EPA standards.

It's thought that a blue flag puts a beach at a big advantage with tourism and Cllr Rena Donaghey says Lisfannon only marginally lost out last time, and thinks other factors should be taken into consideration to give a bit of lenancy: