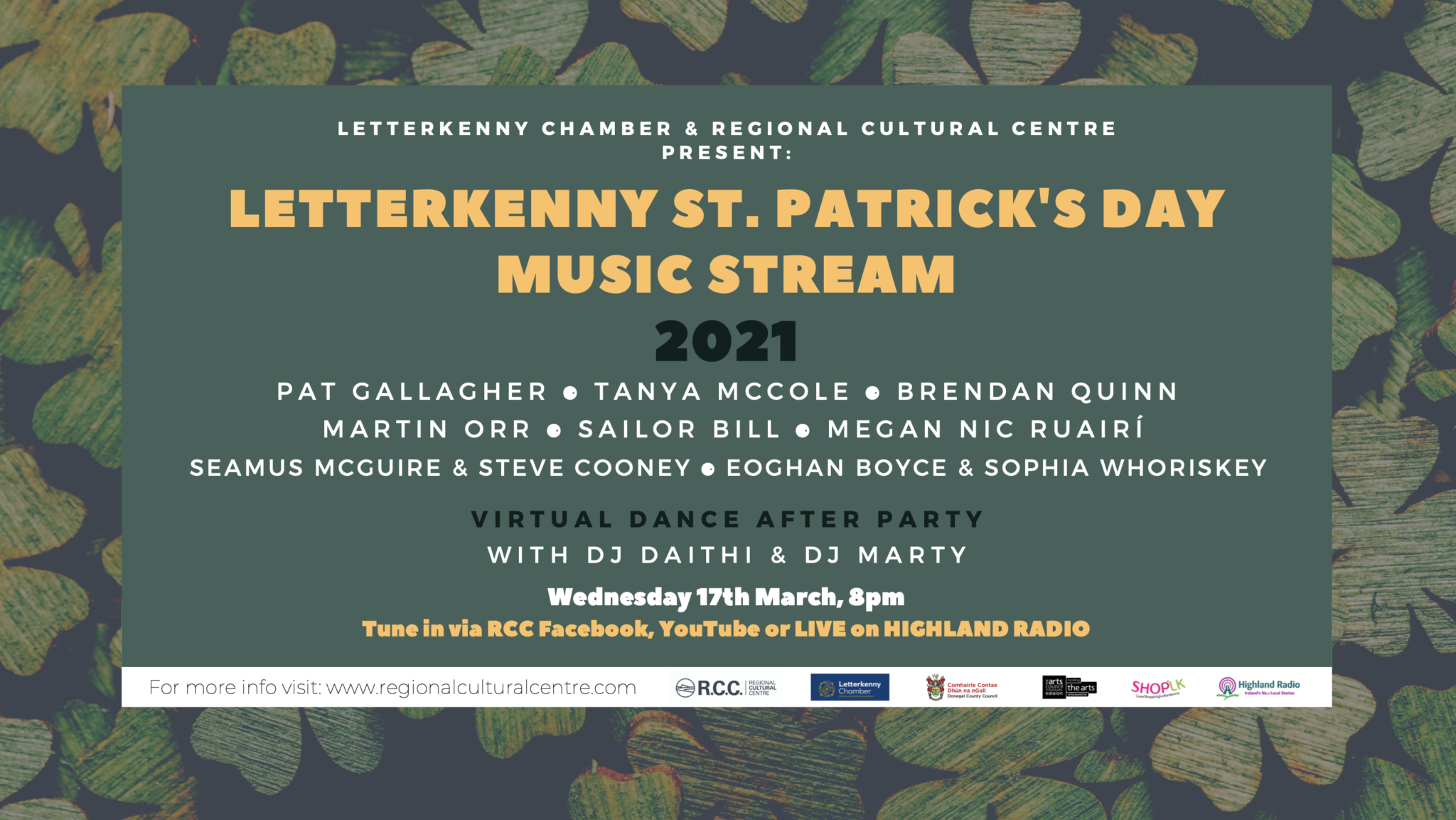 Highland Radio is delighted to be teaming up with the Regional Cultural Centre and Letterkenny Chamber of Commerce for a St Patrick's Day celebration that will invite a worldwide audience into the Cathedral town, on air and online.

Streaming on the RCC's Facebook and YouTube channels, and broadcast on Highland Radio, from 8pm, the celebration will feature a host of Donegal's top musical talents and Irish dancers, and will be followed by a late night live-streamed after party.

There is only a handful of bands that can use the term ‘legendary’, but Donegal’s Goats Don’t Shave are undoubtedly one of them. Their iconic hit Las Vegas (in the Hills of Donegal) is still one of Irish folk rock's most instantly recognisable songs. Frontman and songwriter Pat Gallagher’s songs have been recorded by many artists all over the world.   Hailing from Ardara, Tanya McCole has wowed audiences at home and abroad with her vocal style, songwriting capabilities and flair for interpreting songs of others. She has performed with Sharon Shannon, Mundy, Shane MacGowan and toured with Grammy award winner John Prine.

Megan Nic Ruairí embodies a massive sense of pride for her Irish heritage despite being born in London and raised in Nottingham, England. With most of her songs written from a piano facing the sea, the musician has always struck inspiration from the beautiful landscapes of her current home in Rann na Feirste. So much so, that the seascapes heard on her debut single were recorded below her house tying her art to that which inspires her, accentuating an integral aspect of the song.

Country music legend Brendan Quinn started in the music business playing guitar with The Malachi Doris Ceili Band at the age of 15. While playing in various Irish showbands like ‘The Breakaways’ and ‘The Signs’, he recorded Kris Kristofferson’s ‘Help Me Make It Through The Night’ in 1969 which received extensive airplay in Ireland, and 1972 saw Brendan with an Irish Number 1. He has since had plenty of more Number 1 hits in Ireland and toured extensively through North America and Europe with The Bluebirds and later The Kicking Mule.

Seamus McGuire is a Sligo born, Letterkenny adopted, world-class fiddle player with groups such as Buttons and Bows and The West Ocean String Quartet, he will be joined for the first time by one of the most influential all-time irish traditional guitarists, Steve Cooney. In 2020 Cooney was given the RTÉ Folk Awards 'Lifetime Achievement' Award. Both Seamus and Steve have seen their 2020 album releases being named amongst the 'Top 5 Trad Albums of the Year' by The Irish Times.

Letterkenny singer-songwriter Martin Orr is well known throughout Donegal for performing with his brilliant group The Honky Tonk Heroes but also for his community spirit and fundraising efforts for so many local charities and causes.   Joe Gibson & Sailor Bill is a four piece Irish rock band, playing a blend of rock with a hint of celtic flare, all the energy of a traditional session with the raw power of rock n roll, a perfect to soundtrack your St. Patrick's Day!

As an additional treat, there will also be performances from Irish dancers Eoghan Boyce and Sophia Whoriskey, while the festivities will be closed out in style with a late night live-streamed after party featuring popular Letterkenny DJs, Daithi Ramsay and Marty McIntyre.

More event information will be posted on RCC, Letterkenny Chamber and Highland Radio social media platforms and on www.regionalculturalcentre.com in the lead-up to St Patrick’s Day.

Join the Regional Cultural Centre & Letterkenny Chamber on YouTube or Facebook, and Highland Radio, from 8pm on St. Patrick's Day for what promises to be a fun night of good craic and brilliant music.