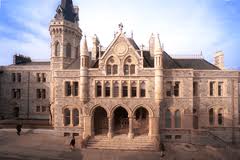 A County Tyrone man, who allegedly rammed a garda car and allegedly assaulted a Garda causing harm in a high speed chase in south Donegal has been remanded in custody for DPP directions at Sligo District Court.

31-year-old Duane Farry with addresses at Ashfield Gardens and Mountstewart Road Fintona, appeared via video link at the district court this morning.

The defendant is charged with causing criminal damage to a garda patrol car at Birchill, Donegal Town on January 24.

The defendant is also charged with assaulting Detective Garda Paul McHugh causing him harm at Rossmore, Donegal Town on the same date.

He is charged with two counts of dangerous driving at Tullyearl on the same date.

And he is charged with dangerous driving at Birchill, Donegal Town on the same date.

The defendant is also charged with refusing to give gardai a breath sample in Ballyshannon Garda Station on the same date.

Defence solicitor Gerry McGovern said this case was adjourned from Donegall Town District Court last Monday.
Sergeant Derek Butler asked for the case to be put back for DPP directions.

The defendant was remanded in custody to Harristown District Court on February 19.

Mr McGovern said there was a bail application before the High Court which would be dealt with.