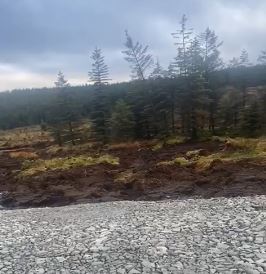 Donegal County Council has confirmed that mitigation works are ongoing at the site of the landslide at Meenbog one week on.

The second meeting of the Cross Border Multi-Agency Working Group took place yesterday, where updates on various works and investigations were discussed.

The Group includes representatives from Northern Ireland Water and the Department for Infrastructure Rivers joining officials from Loughs Agency, Northern Ireland Environment Agency, National Parks and Wildlife Service, Donegal County Council and Derry City and Strabane District Council.
All agencies shared updates on the various works and investigations they initiated in response to the significant pollution event impacting the Mourne Beg River and downstream catchments, triggered by material from a bog slide entering the river.
Details were also shared of further investigations that will be required to determine the impact of the event on the environment.
The Council says that works are ongoing within the site of a wind farm development in Meenbog, from where the slide originated, to mitigate the impact of the pollution and to reduce the risk of further bog slides.
Further meetings of the working group are planned for next week and on an on-going basis.