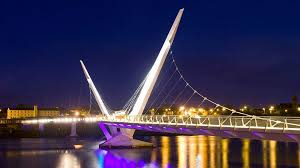 It's emerged that the Derry and Strabane district has the highest claimant rate in Northern Ireland.

It also has the second highest rater of economic inactivity, and one of the lowest employment rates, leading to calls for more government action.

Figures published this week show the claimant count in Derry and Strabane is 7.1% of working age adults, the highest rate of anywhere in Northern Ireland. That's against a Northern Ireland average of 5.1%.

The economic inactivity rate in Derry and Strabane is 30.4%, second only to the neighbouring district of Fermanagh and Omagh, with a rate of 33.1%. The Northern Ireland average is 26.2%,

The employment rate in Derry and Strabane is 68%. In Fermanagh and Omagh it is 65%. The Northern Ireland average is 72%

Foyle MLA Sinead McLaughlin, the SDLP's economy spokesperson and deputy chair of Stormont’s economy committees says Minister Dianne Dodds and her department refused yet again only last week to specify that addressing regional inequality should be a priority for her department. She says support measures must be specifically targeted at Derry and Strabane.