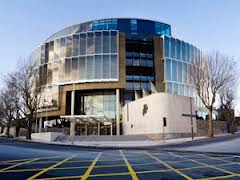 Another man has been jailed for life for his role in the murder of Strabane native Michael Barr, who was shot dead as part of the Hutch/Kinahan gangland feud.

David Hunter, of White City in London, was one of two masked gunmen who killed the dissident republican at the Sunset House pub in Dublin.

Michael Barr was shot seven times when two men wearing Freddie Kruger style masks walked into the pub where he was working on April 25th 2016.

Gardaí linked David Hunter to the shooting through phone evidence and forensics found in the getaway car.

His DNA was found on one of the latex masks.

Through her victim impact statement, Mr Barr's sister, Noeleen, said her brother was gunned down on the orders of others, and she said she couldn't understand how a life could be measured by drugs and money.

Hunter, who's 42, was handed the mandatory life sentence for murder.

He's the third person to be convicted for Michael Barr's killing, but outside court after he was sentenced today, Det Superintendent Colm Murphy said he won't be the last.............