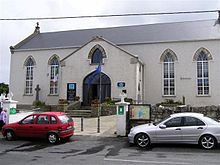 A county Fermanagh construction firm has been returned for circuit court trial for alleged failure to ensure the health, welfare and safety of its employees at a construction site in Gweedore County Donegal, that allegedly resulted in the death of one of its employees, at Dungloe District Court.

The company is charged that on January 15, 2018 at Hydro Race Bridge, Gweedore, that it failed to ensure the health welfare and safety of its employees by failing to access and install pontoons properly in the water.

In particular, there was no fence or rail guard surrounding the edge of the pontoons.

The court was told that company employee Ian Smith fell into the water, and subseqently died.

The company is also charged with failing to identify hazards with the installations, and having no suitable rescue equipment in place.

Inspector Seamus McGonigle told the court that the DPP had consented for a return for trial for the company to the next sitting of Letterkenny Circuit Court on October 27 on all seven charges before the court.