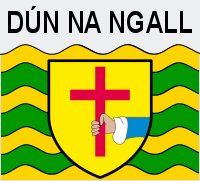 CLG An Tearmainn announced the good news yesterday that they were lifting the suspension on club activities.

However, there are still some players self-isolating as a result of contact with a non-club member who tested positive.

Following consultations with officials from Ulster Council and Croke Park, the Donegal CCC have been asked to re-fix any ties involving self-isolating players if this can be done without unduly disrupting the Michael Murphy Sports Championship schedule.

We are very grateful to clubs for their co-operation all year during this pandemic and hopefully we can get back to a some what normal year in 2021.