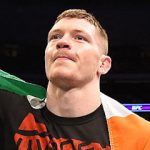 Joseph Duffy has announced his retirement from MMA following his defeat at UFC 173 on Fight Island.

Duffy was beaten by submission via a guillotine choke in the first round of his fight on Saturday night by Spain's Joel Alvarez.

The defeat means that the Burtonport man has lost his last three fights in the UFC.

In a social media post, "Irish Joe" stated: "I am officially retiring from MMA competition"

Thank you all so much for all your messages of support all week. I have been blessed on this journey in MMA and am truly...