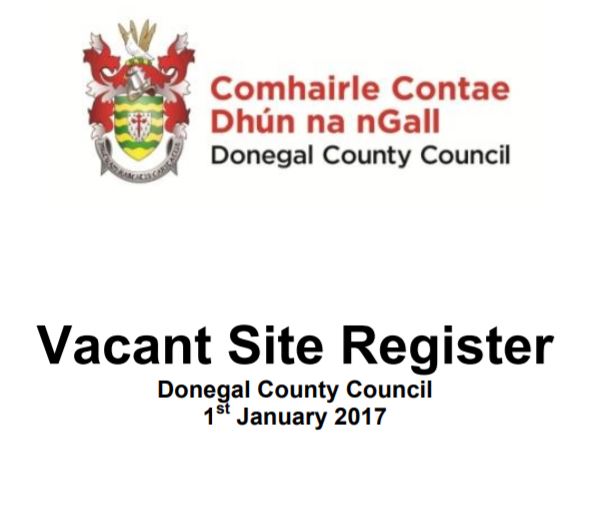 Donegal County Council says it has explored the possibility of using the Vacant Sites Levy as a means of stimulating development sector in the County, but there are significant challenges.

It follows reports that only four of the country's 31 local authorities collected the vacant sites levy last year, leaving more than 9 million euro in funding for housing untapped.

Councils can, the government says, impose a levy of 7% of a site's market value, and use the revenue for housing.

Last week, it was claimed that almost half of the city and county councils didn't have functioning registers of vacant sites in their areas.

Donegal County Council says it is one of 17 local authorities in the country to have active registers, and a link to the Donegal register is available on our website.

However, the council says the challenges faced by local authorities in effectively implementing the Vacant Sites Levy legislation have been well documented. One of the key challenges, the council says, is in identifying if there is a housing need in the area.

This, the council says, is because the criteria set out by government are unclear and open to different interpretations. The council says the very modest amounts of income that would be realised by the levy in this part of the country is also a factor.

As a result, the council says, no levies have been imposed up to now. but the matter is being kept under review.

The Donegal Register can be viewed HERE

Donegal County Council (DCC) has explored the utilisation of the Vacant Sites Levy as a means of stimulating the development sector in the County. DCC is one of 17 local authorities in the country to have active registers, the DCC Register can be accessed at http://www.donegalcoco.ie/services/planning/developmentplansbuiltheritageincludinggrants/vacant%20site%20register/

The challenges faced by local authorities in effectively implementing the Vacant Sites Levy legislation have been well documented recently nationally both in the national press and in a report by the Parliamentary Budget Office (‘Challenges in implementing and administering the Vacant Site Levy’: PBO Publication 29 of 2020 21 May, 2020). One of the key challenges cited by various local authorities, including DCC, is in identifying if there is a housing need in the area as per the criteria defined in the relevant legislation, the ‘Urban Regeneration and Housing Act, 2015’. This challenge arises as the criteria are unclear and open to different interpretations [Section 6(4), Urban Regeneration and Housing Act, 2015]. These criteria are contained in Section 6(4), Urban Regeneration and Housing Act, 2015. A further consideration for DCC is the very modest amounts of income that may be realized by the levy in this part of the country. These considerations have resulted in no levies being imposed up to this point. Notwithstanding, DCC is keeping this matter under review.

From a broader perspective, the regeneration of our towns and villages is a key priority for the Council. Organisational changes have been implemented to assist in achieving these objectives and these include the setting up of a Regeneration office within the Planning Directorate and a new Economic Development Directorate. The Regeneration office has already secured significant funding from the national Urban Regeneration Development Fund and Rural Regeneration and Development Fund respectively for Letterkenny, Buncrana, Derrybeg, Killybegs and Ailt an Chorráin (Burtonport)/ Oileán Árainn Mhór (Arranmore Island). Further opportunities also are being pursued in other areas including Ballybofey/Stranorlar, Ballyshannon and Ramelton.