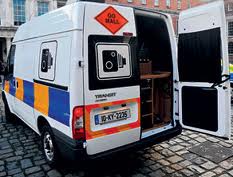 Gardai paid a speed camera operator 26 million euro more than it got through its fines in the space of three years.

But the revenue generated in fines from its detections was 18.1 million euro.

An Garda Siochana says the main purpose of these speed checks is to save lives - not generate money.

But Sinn Féin's justice spokesman, Martin Kenny, says the arrangement should be reviewed..............