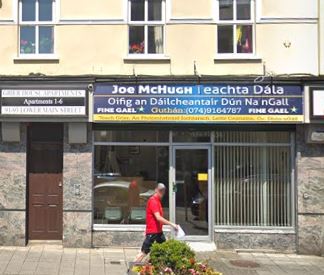 Representatives of the Save Our St Joseph's Hospital Action Group in Stranorlar have handed in a letter to Minister Joe McHugh’s Letterkenny office today, seeking a meeting with him.

They say several requests for such a meeting have been made in the last 11 months but to no avail.

The group says at the beginning of last month, Minister Mc Hugh announced that that planning for St. Josephs Stranorlar and Ramelton hospitals was included in the HSE National Service plan 2019 and that both projects would go to planning early next year.

Representatives of the Save Our St Joseph's Hospital Action Group (Stranorlar) handed in a letter at midday today Tuesday 1st October to Minister Joe Mc Hugh’s office in Letterkenny, requesting a meeting with Minister Joe Mc Hugh. Several requests for such a meeting have been made in the last 11 months but to no avail.

Minister Mc Hugh on 25th July 2018 at a meeting attended by other Donegal Oireachtas Representatives committed to continuous engagement with our Group. He admitted there were mistakes in the past and from now on there would-be on-going engagement between him and our Group. We saw that day as a positive 2nd beginning to our campaign, all parties committed to be on board and we expected a new level of honesty and commitment to open communication.

Minister Joe Mc Hugh made a commitment on the 25th July 2018 to organise and co-ordinate a meeting with Health Minister Harris and Minister of State Jim Daly, the secretary General of the Dept of Health, Senior Dept. and Senior national, regional and local HSE Officials, our Action Group and Donegal Oireachtas members for that September.  This we hoped was to be the roadmap to reverse the cuts and decision to close down the residential and nursing care units, to restore our bed complement to 78 and restore staffing levels which have were and continue to be depleted, the reversal of the Kathleen decision of 26th July 2016. The meeting took place on 7th November 2018, with the absence of the necessary key departmental and HSE officials including the absence Minister Harris. It was hoped that that crucial meeting would guarantee the survival of St. Joseph’s as a residential nursing care, respite and dementia unit and that meeting would have delivered the reversal of the Kathleen Lynch decision. It now seems clearer that the meeting was nothing more than a political attempt to hoodwink us in the event of a November 2018 election.

On Monday 22nd July 2019 at 10.29 am, Minister Mc Hugh’s office in what can only be described as Government last minute.com issued an invitation to a meeting with Minister Jim Daly in Lifford, for the next morning at 11:30am at Donegal County Council Offices. We requested that the meeting take place in the afternoon in order to facilitate the Councillors and our Action Group who could not be present in the morning. Unfortunately, this was not possible according to Minister Mc Hugh’s office. We reissued our request on the 22nd July to meet Minister Mc Hugh but sadly no communication has been forthcoming from his office.

In our experience to date this Governmant@last minute.com appears to be par for the course as was the case for the important 7th November 2018 meeting in Dail Eireann when HSE officials were summoned to Dublin the day before the meeting and Oireachtas members from Donegal were not even informed.

We are bitterly disappointed by the failure of Minister Mc Hugh to meet with us, having given commitments to have ongoing meetings with our group.

Minister Mc Hugh announced on the 2nd September that planning for St. Josephs Stranorlar and Ramelton hospitals was included in the HSE National Service plan 2019 and that both projects would go to planning early next year. Minister Mc Hugh went onto Local radio saying the commitment is in the plan now, it is in black and white now, it is in the service plan ( to retain the beds in the short stay, long stay/residential and dementia units). We have trawled the 156-page plan and we cannot find what Minister Mc Hugh announced. The only reference to St. Joseph's hospital Stranorlar in Appendix 4 on pg. 149 is the provision of an ambulance restroom at St. Joseph’s Hospital, Stranorlar at a cost of £510,000.

This gives rise to serious concern about Minister Mc Hugh’s announcement as does an answer by John Hayes Chief Officer CH01 HSE on 25th February 2019 to a Health Forum member.

"The HSE 2019 Capital Plan is currently being finalised and it is intended to proceed with the procurement of a Design Team for this project this year, subject to availability of funding." John Hayes.

There is no mention of any planning or funding for the Community Nursing Unit, long stay/residential, short stay or Dementia unit spending in the HSE 2019 Capital plan.

Could the 2nd September be Groundhog day all over again??

Funding of €4m for upgrade works to retain and enhance community hospital services in Stranorlar and Ramelton has been announced by the Health Services Executive.

The millions announced with fanfare - a problem solved so we were told, that was not to be, for there never was a grant of €2.75million for St. Josephs. The announcement of the grant on the 13th April 2017 was never a reality. The further re-announcements of the grant of €3.5 million on 26th July 2017 and of €5.6 million on 31st July for Ramelton and St Joseph's Hospital were not a reality.

The Save Our St Joseph's Action asks he Minister to respond positively to our request to meet with us on the date proposed in our letter or at a date of his choice. We are calling upon Minister Mc Hugh to point out the planning within the HSE 2019 Capital Service Plan and show us the decision to reverse the Kathleen Lynch decision. It is time to Stop the Spin. It is time to put the spades into the ground and secure St. Josephs for future generations. Time for Government to stand up and be counted for St. Josephs, time for the Government to put the plans and funding on the table and the spade into the ground. Time to immediately restore staffing levels, to restore beds, to restore services, to practice what they preach about caring for elderly and vulnerable people in their own communities. NO MORE CHINESE WHISPERS. TIME FOR HONESTY AND ACTION.