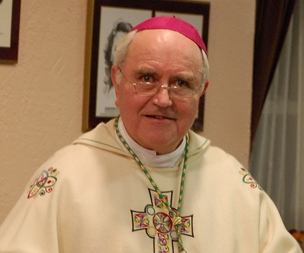 The funeral has taken place in Derry of Bishop Seamus Hegarty, who died on Friday after a long illness.

The Kilcar native became Bishop of Raphoe in 1982 at the age of 42, before becoming Bishop of Derry in 1994, where he served for 17 years, before retiring due to ill health.#

In his homily, current Bishop Donal Mc Keown said much of who Bishop Hegarty was had ebbed away over the last 8 years since he was forced to retire as Bishop of Derry because of ill health.

Dementia in its various forms is a cruel affliction, he said, much of the person has died long before the heart ceases to beat.

He said Bishop Hegarty's years in both Donegal and Derry very challenging ones, partly connected with the Troubles, and – like many church people – he used all possible channels to stop killing and to build bridges.

However, he reflected, those years were also heavily marked by the revelations of child sexual abuse, and grave errors were made in responding to the wave of allegations.

That has all left a legacy of pain, alienation and mistrust, Bishop Mc Keown acknoweledged, and the Diocese of Raphoe and Derry were no different from anywhere else.

He said the soil and the faith of Kilcar were Bishop Seamus Hegarty's pride ; Donegal and its traditions were nobody’s poor relation.

Today we gather to celebrate the funeral rites for Bishop Seamus Hegarty, who died on Friday last.  But while his body had kept going until a few days ago, much of who he was had ebbed away over the last 8 years since he was forced to retire as Bishop of Derry because of ill health. Dementia in its various forms is a cruel affliction.  Much of the person has died long before the heart ceases to beat.

He was a cainteoir dúchais (a native Irish speaker) from Donegal with a great love of the county.  When both your parents, your four grandparents and six of your great-grandparents come from Kilcar, you know who you are!  Life was not easy.  His mother died in childbirth when he – the eldest of three children – was only seven.  For him and his two siblings, education provided the opportunity to see broader horizons.  And they all took advantage of the chances that they received.  While Irish was his first language he was blessed with a real grá for other languages and an openness to exploring the centuries-old links between Irish people and Europe.  His fluency in German permitted him to spend the summer working in German parishes, including one spell in the Archdiocese of Munich-Freising where the then bishop was Archbishop Ratzinger, later to become Pope Benedict.  The soil and the faith of Kilcar were his pride.  He believed in the God Emmanuel who walked the roads of Palestine and who still is God-with-us in rugged communities of profound faith and in simple churches where pobal Dé gather i dteach an phobail[1].  Donegal and its traditions were nobody’s poor relation.

He was called to leadership in Raphoe at an early stage.  In all those tasks that he was asked to assume, he carried those out with a deep sense of duty and loyalty.  After some years as a very young school principal in Falcarragh, he was appointed Bishop of Raphoe at the age of 42 and served there for 12 years, followed by 17 years as Bishop in this diocese, being nominated to Derry almost exactly 25 years ago on 1 October 1994.  These were very challenging years North and South, partly connected with the Troubles, where – like many church people – he used all possible channels to stop killing and to build bridges.

But those years were also heavily marked by the revelations of child sexual abuse.  Terrible crimes had been inflicted on young people across this country and around the world – and, for a range of reasons, grave errors were made in responding to the wave of allegations.  That has all left a legacy of pain, alienation and mistrust.  The Diocese of Raphoe and Derry were no different from anywhere else.  He knew as well as any that we come before God, never boasting of our achievements nor crushed by our failures but trusting in the Cross of Christ.  Only the often-uncomfortable truth can set any of us free.

Today’s Gospel speaks of Jesus’ disciples, Peter and Andrew, James and John, being called to leave their occupation and security - and become fishers of people.  Bishop Seamus Hegarty was not just a keen angler – but a person who felt that vocation to become a fisher of people at Christ’s call.  He knew that leadership in the Church was to mediate the love and mercy of God to the people and places where it is most needed.  Like Jesus’ disciples, we may often cast out nets and catch little.  But, as the words of the hymn say, ag Críost an mhuir/ag Críost an t-iasc. I liontaibh Dé go gcastar sinn.[2]  We may seem to be bad fishermen – but Ag Críost an síol, ag Críost an fómhar; in iothlainn Dé go dtugtar sinn[3].  Christ is Lord of the harvest and master of the catch.  We can only say ‘We are unworthy servants. We have done only what we were supposed to do.’ Lk 17:10) We do our best and leave the rest of God’s power and timing.

He had a deep sense of commitment to Irish emigrants.  Many had to leave this island because of unemployment and other reasons.  Some ended up in dire poverty abroad and he worked tirelessly to support the emigrant chaplaincies around the world.

He had a passion for education and many of the excellent schools in Derry diocese were built in his time.

From personal experience, he knew how fragile and precious human life is and was very strongly committed to the pro-life movement.

And in his ministry, his episcopal motto speaks of where he found support.  Maria advocata Nostra – Mary, our advocate.  Mary the mother of the Lord had a deep place in his heart – and I am sure that this was not unconnected with the fact that his own mother, who had died so young, was also called Mary.  The Mother of Jesus plays a large part in Irish spirituality.  In the family of God the Father, she is Christ’s first disciple.  There is a nearness of God to the world in the Celtic tradition.  And the poor woman of Nazareth had her place in simple homes where most of us grew up.  The image of Mary as advocate reflected not a divine royal court but a family gathered round the hearth.  For Bishop Seamus, that played a large part in his uncomplicated faith which trusted in the love and wisdom of God, even when the winds seemed to howl around outside.

We come together to commend to the Lord one who bore the many burdens of office with complete dedication.  At heart he was a simple man.  Kindness and generosity were hallmarks of his nature – even though a tougher exterior might sometimes have shown itself.  He had an unflagging loyalty to the Church and to its service, in whatever role he was asked to play.  But he knew that we are all in need of redemption – and he would never presume on the grace of God. In that spirit, we lay him to rest after these last years of growing debility.  For we believe in a Christ whose Resurrection will raise up our mortal bodies in all their frailty – and we believe in a God before whom we are always known us as individuals, both before we know ourselves and after our consciousness fails.

Today we celebrate the Feast of Saint Eunan.  Bishop Hegarty came from the land of Eunan as did Columcille.  Both left their native soil and were missionaries in Christ’s name thar sáile (across the waves) as abbots on Iona.  We lay this son of Tír Chonaill in the land where the Lord called him to be Bishop, even though that meant leaving his native Donegal.  And we commend him to the gracious hands of God who is Lord of the whole earth and who loves us wherever we lie.  And in the words of an old Irish prayer to Saint James, we can pray

My trust lies in the heart of your name.

At the hour of my death may I be gathered into your net.)

[1] ‘The house of the people’ – the Irish phrase for church

[2] Christ’s is the sea, Christ’s the fish. May we be gathered into the nets of Christ

[3] Christ’s is the seed, Christ’s the harvest. May we be gathered into the barns of Christ.