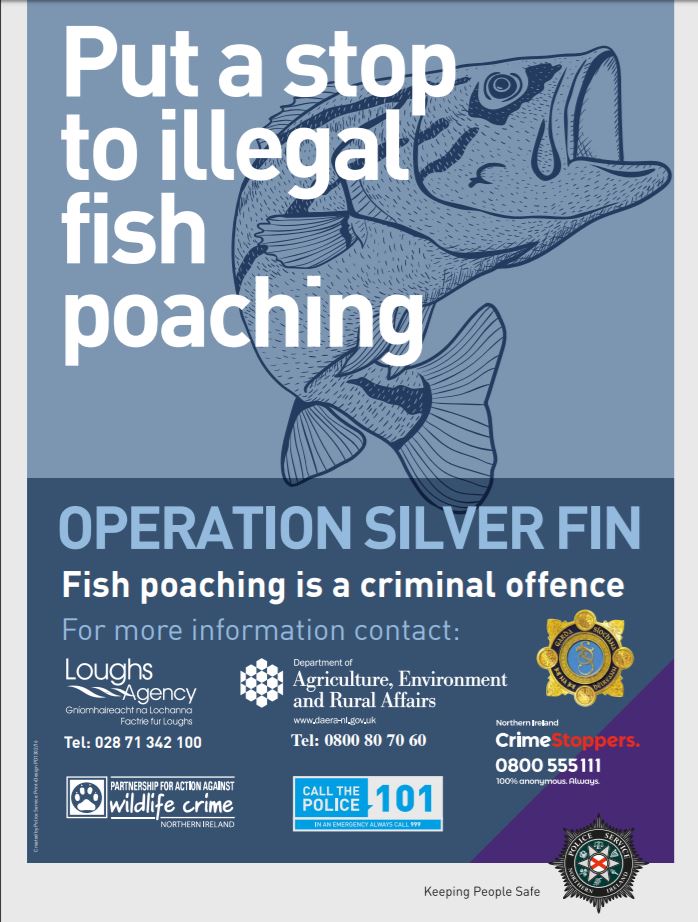 Gardai have teamed up with the PSNI in an operation aimed at tackling fish poaching in Strabane and Lifford.

Operation Silver Fin has been launched in the aqrea, after concerns were raised about wildlife crime in the area.

Locals are being asked to report suspected fish poaching, with the operation also focusing on the enforcement of fishing regulations.

Gardai say the net is closing in on fish poachers, and they hope the operation will highlight the importance of protecting fish stocks.

An Garda Siochana have teamed up with the Loughs Agency, PSNI, along with partners from the Partnership for Action Against Wildlife Crime Fin group as part of an operation to target poachers and moved Operation Silver Fin to Strabane.

Sgt. James McLaughlin said, "PSNI are committed to tackling wildlife crime including fish poaching in conjunction with our partners. Wildlife crime is taken extremely seriously by the Police Service of Northern Ireland. The significance of this kind of crime cannot be over stated. At the most serious level it can have a direct impact on the economic, environmental and cultural lives of communities and can also negatively affect the conservation status of some native species.

"Operation Silver Fin is a new initiative originally launched in Toome a few months ago and now it has been noted there are concerns in this area. The operation focuses on encouraging the public to report suspected fish poaching to the appropriate agency, enforcing fishing regulations and increasing awareness of the legislation surrounding fishing and the importance of protecting fish stocks.
Superintendent Martin Walker of An Garda Síochána, "I fully endorse the collaborative efforts of all the enforcement agencies associated with this wonderful initiative to robustly challenge the illegal activities associated with all forms of fish poaching. The development of cordial working relations and partnership is fundamental to the success of this and similar initiatives which we in An Garda Síochána  have developed with other stakeholders e.g. Inland Fisheries Ireland ( Sea Trout & Salmon ), NPWS ( Illegal Catching of Cray Fish ) and focal coarse angling fishing clubs. Continued enforcement action is essential in addressing this major wildlife crime’’

Emma Meredith, PSNI Wildlife Officer, said, "I am delighted to see this partnership approach of local police, ASG and Loughs Agency working together to combat fish poaching and associated crimes.”
John McCartney, Loughs Agency’s Director of Conservation and Protection said "Loughs Agency are responsible for the protection of inland fisheries and marine resources of the Foyle and Carlingford areas. Our Fishery Officers work tirelessly patrolling the rivers, loughs and coastlines of our catchments for illegal fishing activity. We encourage anyone who suspects illegal fishing in the Foyle or Carlingford catchments to call our 24hr Response Line on +44 (0)2871 342100”.