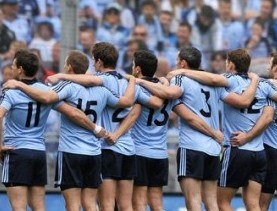 A Dublin fan has been criticised online for allegedly attempting to burn a Tyrone flag in Omagh after Dublin's win.

Jim Gavin's team defeated Tyrone over the weekend - qualifying for an All-Ireland semi-final against Mayo this Saturday.

However online, one supporter has been accused of trying to set fire to a red and white flag after the game.

The post continued to say every Dublin supporter booed and screamed the person down.