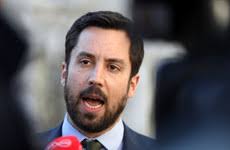 The Housing Minister is in Donegal today for a number of key engagements.

It's widely expected that Eoghan Murphy will be in a position to give further details on the long awaited Mica Redress Scheme which was announced in May.

The Mica Action Group is also holding its first public meeting tonight at An Grianan Hotel in Burt since the scheme was first announced.

One of the speakers tonight, Cllr Martin McDermott says the group is hoping to get a definite timeline today: