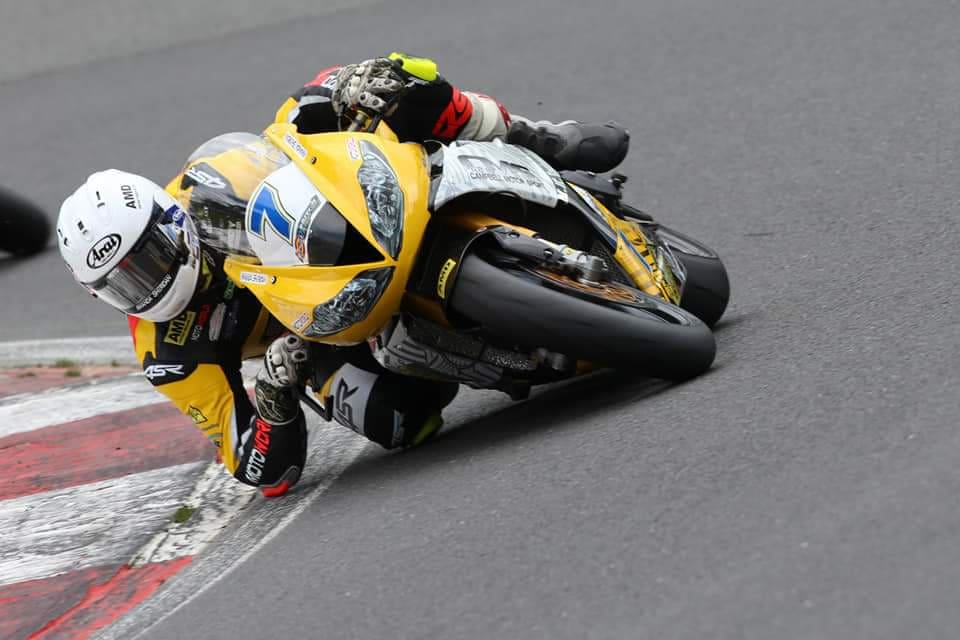 Kilmacrennan's Richard Kerr had another great weekend at round 6 of the British Superbike Championship  in the Dickies Supersport class at Snetterton this weekend.
Riding the Campbell Motorsport triumph Richard had a steady few practice sessions and qualifying yesterday where he qualified in 13th position (10th Supersport) as the Moto two class runs alongside the supersports.
Richard had a great Race 1 and was running top ten all race and eventually finished in a fantastic 7th position in the Supersport class.
Richard lined up on row 5 for race two and after taking a few laps to sort themselves out the Kilmacrennan man was in 9th position in the Supersports  and 3 seconds off a six man battle for 5th place.
This was how it ended at the flag and Richard was slightly disappointed as he had the same pace as the riders battling ahead and the lap times were near identical.
Both races where won by Dubliner Jack Kennedy with his team mate Brad Jones second and Carrickfergus rider Alastair Seeley 3rd on both occasions.
Richard now lies in a fantastic 5th position in the championship as it heads to the ultra fast Thruxton circuit in 3 weeks time where Kerr and the team hope to maintain their great run of consistency in the ultra competitive class.
Richard as always would like to thank all his sponsors for their continued support.
The team plan to hold a night at the races in the coming weeks to help raise funds for the remainder of the campaign and more information will be available on the teams Facebook page, Richard Kerr racing.