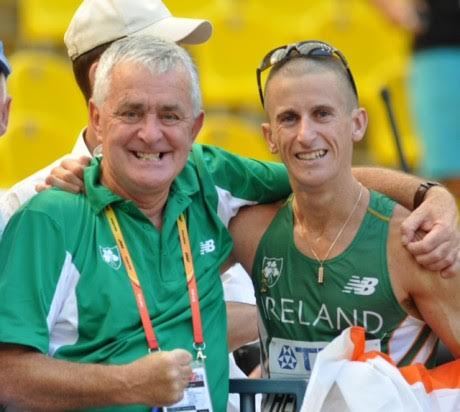 Two former Irish athletics stars will be in Donegal next Monday night to mark the launch of Patsy McGonagle’s new autobiography.

Former World champion and Olympic medallist Rob Heffernan and former European champion David Gillick will be the guests of honour at the official launch of ‘Relentless: A Race Through Time’, which charts the story of McGonagle’s life and times.

There is an open invite to the launch, which takes place at the Finn Valley Centre at 8pm.

McGonagle was Irish athletics team manager for 25 years, during which time he led the cream of Irish track and field (including Sonia O’Sullivan, Heffernan, Gillick, Derval O’Rourke and Mark English) into 4 Olympic Games, 6 World Championships and 6 European Championships.

In his time in charge, Ireland came home with 2 Olympic medals, 9 World medals and 27 European medals.

McGonagle was Irish manager when Heffernan won gold in the men’s 50k race walk at the 2013 World Championships in Moscow and oversaw Gillick’s winning of a European indoor gold medal in 2007 in Birmingham.

Irish athletics icon O’Sullivan, who won a silver medal at McGonagle’s first Olympic Games in Sydney 2000 is set to feature on the launch via video link from Australia.

McGonagle’s memoir, written by Donegal Daily/Donegal Sport Hub Sports Editor Chris McNulty and published by Hero Books, charts the Ballybofey man’s remarkable story and will be on sale on the night.

A graduate from St Mary’s College for Physical Education in London in 1972, McGonagle never lost sight of his home county – he built Finn Valley Athletics Club into a world class facility, and twice served as a coach and selector with the Donegal senior football team.

McGonagle now tells his amazing life story in which he always remained Relentless.

'Relentless: A Race Through Time'