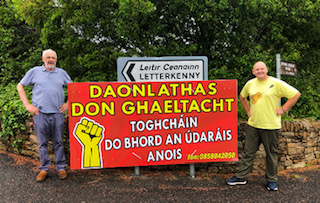 A Donegal councillor is leading a campaign to re-introduce elections for the board of Udaras na Gaeltachta.

Cllr Michael Cholm Mac Giolla Easbuig put up billboards today in Gaoth Dobhair and Croithlí to launch the campaign, saying the decision of then Minister Dinny McGinley to end elections in 2011 must now be reversed.

He claims the current strategy for the language is lacking a real community input, and at a time when experts say this is our last chance to preserve the Gaeltacht, there is neither rhyme nor reason to the fact that there are no elected members of the board of Údarás na Gaeltachta to steer this important project.

Cllr Mac Giolla Easbuig says if this had happened in the wider community, there would have been uproar............