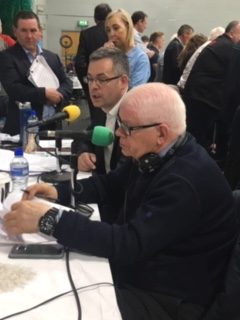 Early tallies for the Glenties electoral area show that Independent Cllr Michael Cholm Mac Giolla Easbuig is the early front and runner on course to retain his seat.

15 boxes have so far been opened and tallies have indicated that Cllr Mac Giolla Easbuig has 14.9% of the vote followed closely by SF Cllr Marie Therese Gallagher at 14.3%.

Other candidates who seem to be faring well include Fianna Fail Candidate Noreen McGarvey at 11.1% and Anthony Molloy at 9.8%.

It's very early days yet though with the majority of boxes for this area yet to be open.

Donegal Deputy Pearse Doherty has been giving his assessment of what's on the table so far: