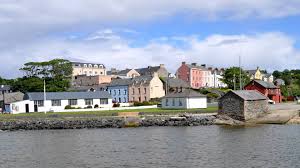 Irish Water had a positive meeting yesterday with the Donegal Oireachtas members where they discussed the utility’s plans to develop much-needed wastewater infrastructure in Moville.

At present Moville has no municipal wastewater treatment facilities and the discharge of untreated wastewater into the Bredagh River has seen it classified as being ‘Seriously Polluted’ by the Environmental Protection Agency (EPA).

The new plant will facilitate the decommissioning of more than 15 temporary treatment plants in housing developments in Moville and allow for applications to be made to connect them to the public sewer. It will stop ongoing pollution at local beaches; facilitate social and economic development and ensure compliance with national and EU regulations relating to the treatment and discharge of wastewater.

One of the concerns raised by the Oireachtas members at the meeting included the location of the outfall pipe. However, Irish Water representatives were able to dispel the myth that discharges from the new treatment plant would pollute the coastline and destroy the beaches. In fact, the opposite is true. The new treatment plant will dramatically improve the water quality along the coastline ensuring the beaches are protected from wastewater pollution.

Another concern discussed was the issue of odours. Irish Water explained to Deputy McConalogue and Senator MacLochlainn that appropriate odour management will be provided. This will ensure that our staff do not have to work in a malodourous environment and that no odour nuisance is created locally.

A third issue that Irish Water had the opportunity to discuss was the myth that the European Court of Justice ruled against the planning permission granted by An Bord Pleanála.

A case regarding the planning decision or any aspect of the scheme was not submitted to or heard by the European Court of Justice. A judicial review of An Bord Pleanála’s decision was taken to the High Court by a member of the public. Judgement was delivered on 26 August 2013. The Court rejected all of the complaints made. The Court upheld An Bord Pleanála’s decision to grant planning permission, stating that the evidence “overwhelmingly demonstrates that the sooner this project commences the better. It is a great pity it has been delayed so long.” The planning permission granted for the scheme is still valid along with the CPO which was confirmed by An Bord Pleanála.

Both Oireachtas members expressed their disappointment at Greencastle not being included in the current scope of the project. Irish Water advised that Moville is currently one of the highest priority schemes for Irish water due to the ongoing discharge of untreated wastewater from the public sewerage system.

The current design will enable the connection of Greencastle at a future date.

Speaking following today’s meeting, Colm Claffey, Irish Water said: “Today’s meeting provided us with a fantastic opportunity to meet with Donegal’s Oireachtas members and discuss in an open environment their concerns and hear their submissions. We were delighted to be able to clarify some misinformation that had been circulating and to impress on them the absolute need for this essential infrastructure to protect the beaches in Moville and dramatically improve the quality of bathing water.

“We look forward to progressing with the project and delivering a state of the art wastewater treatment plant for the people of Moville.”

The discharge of untreated wastewater is polluting the River Bredagh and Lough Foyle, and detracts from the amenity value of the river and the coastal waters around Moville. The new sewerage scheme will bring benefits to the area in terms of health, integrity of the environment and improved water quality for all. Cleaner water will enhance Moville’s amenity value and act as a platform for social, economic and population development. The project will also ensure that the water quality standards set down by regulatory bodies will be achieved.

“Irish Water will continue to engage with the local community over the course of the project’s development. We would like to thank those who attended our first information evening and acknowledge the widespread support we received for this project on the night. We look forward to meeting with the local elected representatives and others next month,” added Colm.

Further information and a Frequently Asked Question document about this proposed scheme is available on Irish Water’s website www.water.ie/moville