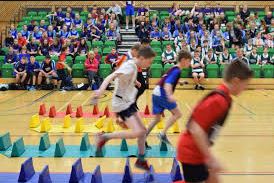 Two of the four Donegal teams who earned the right to represent the county at the national finals of the primary schools sportshall athletics were crowned All-Ireland champions at the Athlone Indoor Arena last Wednesday.

Gaelscoil Adhamhnain in Letterkenny won the national title in the 3rd and 4th class boys section, while Scoil Mhuire Gan Smal, also in Letterkenny, took the honours in the 5th and 6th class girls category.

Scoil Iosagain in Buncrana represented Donegal in the 3rd and 4th class girls and 5th and 6th class boys competitions and both teams performed extremely well.

The Donegal Sportshall Athletics finals held at the Aura Leisure Centre in Letterkenny the previous Monday threw up plenty of excitement and drama, with a wealth of talented young athletes performing to the highest of standards.

Addressing the pupils at the end of an extremely enjoyable spectacle, Donegal Sports Partnership board member, Eamon Harvey, commended all involved for their efforts.

"Today has been another great success and it was great to see all the boys and girls enjoying themselves while competing in the runs, jumps and throws - that's what this programme is all about. If you are not a member of your local athletics club, you should go along, become a member and get involved," Mr Harvey commented.

"Thanks to the teachers and the coaches for getting the children ready for these competitions," he added.
The finalists in each of the sections were are as follows: