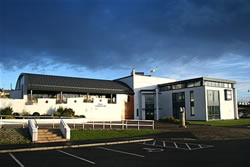 A man in his 20s has been arrested following a fatal crash in South Donegal overnight.

A man and a woman, also in their 20s, were killed when the car they were passangers in, hit a wall at Eastend in Bundoran at 3:25am.

Three other people in their 20s were seriously injured in the single vehicle crash and have been taken to Sligo University Hospital.

The man arrested presented himself to Gardai in Ballyshannon and is being held under Section 4 of the Criminal Justice Act.