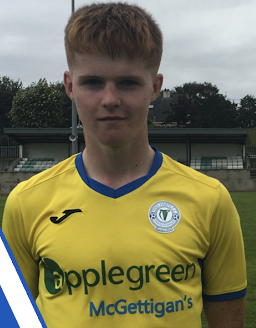 McDaid’s double for Harps 15s
The Finn Harps U15s ended the regular season with a decisive three goal victory over Drogheda United at the Curragh, Killygordon with Jamie McDaid hitting the net twice.

Kevin McHugh’s boys headed into the game guaranteed of their place in the elite stage of the U15 National League and asserted their control from the early stages of the game.

Jamie McDaid opened the scoring when he reacted quickest after Drogheda failed to clear an Oran McGrath deep cross. McDaid shifted the ball out of his feet before unleashing a low left foote strike which arrowed past the outstretched hand of Antonio Ignet.

McDaid was involved again shortly after when he linked up with a clever give and go with Drew McKinney, though fired his shot wide of the upright. Harps were unfortunate not to double their advantage on the next attack when Caomhan Wheeler fired a long range strike which Ignet could only parry out to Daryl Porter's feet, though the Drogheda keeper recovered to pull off a fantastic follow up save from Porter.

Harps didn't have to wait long though as on the 18th minute they increased their lead. Daniel Gildea found space out wide on the right beating Aaron Murphy before delivering a driven cross low across the area where McDaid was on hand to force the ball past
Ignet.

Drogheda reacted well to going two goals down and almost pulled a goal back when Francis Campbell raced on to a quick free kick played over the top of the Harps defence, however his goalbound shot was pushed wide by the right hand of Paddy McGarvey. Harps had one final chance before the break as McGrath powered forward from left back to drive a thunderous strike which Ignet was equal to.

McDaid started the second half in search of his hat trick goal and was presented with a chance 5 minutes in. An intelligent pass around the outside of the defender from Jack Dwyer release McDaid though on the keeper though the forward this time pulled his strike agonisingly wide of the base of the post.

From the resulting goal kick a long ball from substitute Jack McCarthy found its way over the entire Harps defence leaving Drogheda bearing down on the Harps goal, however they were met by McGarvey who was in superb form pulling off a quick double save to keep the Harps clean sheet intact.

Just a minute later McGarvey was called upon again and again he produced a wonderful save. Ruairi Kinsella was played through, though McGarvey was sharp off his line and managed to claw Kinsella's chipped shot away from danger. Harps withstood the period of
Drogheda pressure and went in search on an insurance goal. Gildea tested out McCarthy with a header as he connected with a deep cross from Conor Campbell. While moments later McCarthy denied Gildea again pushing his inswinging free kick wide. Gildea was looking more and more dangerous as the half progressed and spurned an opportunity when he dragged his shot wide after good build up play from Drew McKinney.

Gildea finally got on the scoresheet in the very next attack as McDaid turned provider. McDaid received the ball in midfield before playing a pinpoint pass between the Drogheda centre-backs to Gildea who composed himself before passing the ball underneath McCarthy and into the net.

Harps can look forward to the elite stage which starts at the end of the month which will see them take on the 7 qualifiers from the other groups. In the meantime Harps will turn their attention to the U15 Nationa Cup which takes place next weekend when they face UCD at home.

Boyle’s boys stay third
The Finn Harps U17s remain third in Elite Northern Section of the Northern League after coming from 2-0 down at half-time to draw against Sligo Rovers in Ballybofey on Saturday.

Sligo came into the game seven points behind Declan Boyle’s boys and looked like closing the gap until Carndonagh lad Luke Rudden pulled one back and the Stephen Black from Kilmacrennan secured a share of the spoils for the home side.

The Finn Harps U17s travel to take on Shelbourne in Dublin this Saturday.

Defeat for Harps 19s in Sligo
After their Enda McGuill Cup semi-final defeat earlier in the week the Finn Harps
U19s lost again on Sunday this time in the Elite Northern Section of the National
League going down 2-0 away to Sligo Rovers.

Still Joe Boyle’s side is well placed in the table with 27 points from 13 games and currently sit third. After Sunday’s victory Sligo are now four points behind Harps. Boyle’s boys are home to second from bottom Shelbourne on Saturday.