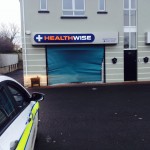 Gardai have launched an investigation after the local pharmacy in Newtowncunningham was broken into overnight.

The robbery is believed to have happened at some stage between 3 and 4 o’clock this morning.

Extensive damage has been caused to the premises as it’s understood that a jeep was used to ram raid the front of the building.

Two tills and a quantity of goods have been stolen.

The property has been sealed off with Gardai currently carrying out a forensic examination this morning while CCTV is also being assessed.

Anyone with information is asked to contact Buncrana Garda Station on 074 9320540.

The pharmacy in question was also the target in an attempted break in some years ago.