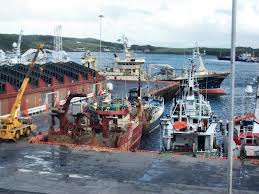 The Marine Minister says he is taking legal advice to determine his next move on the issue of penalty points for fishermen after his previous statutory instrument imposing points was annulled by the Dail in May.

In the meantime, Michael Creed told the Dail that infringement proceedings against Ireland for non-implementation of the EU points system have commenced.

Answering questions from Donegal Deputy and Leas Ceann Comhairle Pt The Cope Gallagher, the minister said he would consult with key stakeholders if necessary, but warned that EU regulations on this matter are highly prescriptive and leave little room for further negotiation.

To ask the Minister for Agriculture; Food and the Marine the progress made to date in consulting with other political parties and the fishing sector in regard to drafting a new statutory instrument to address penalty points for serious infringements as per the European Union (Common Fisheries Policy) (Point System) Regulations 2018 (details supplied); when he plans to consult directly with all interested parties in order to resolve the impasse; the discussions and or meetings he has had with the sector since the motion to rescind SI No. 89 of 2018 was passed by Dáil Éireann in May 2018; and if he will make a statement on the matter. (Details Supplied) (previously known as S.I. No. 89 of 2018)

As the Deputy is aware, Council Regulation(EC) No. 1224/2009 of 20 November 2009 provides for a points system for serious infringements targeted primarily at the licence and therefore the licence holder. The primary purpose was to try and ensure a level playing field for those fishermen who were respecting the rules. The EU points system is designed to complement and not replace national sanctions and ensure a level playing field across the EU.

That SI adopted the requirements of Article 92 of Council Regulation (EC) No. 1224/2009 and Title VII of Commission Implementing Regulation (EU) No. 404/2011 of 8 April 2011. In accordance with the regulations, that instrument established a point system, which would apply to the Licence Holder of a sea-fishing boat when a serious infringement of the rules of the Common Fisheries Policy is detected within the Exclusive Fishery Limits of the State or for an Irish vessel, wherever it may be.

I am at present considering with my legal advisors next steps following that annulment. Once that legal advice is to hand and has been fully considered, I will determine next steps and will liaise as required with key stakeholders should it be considered necessary or desirable to do so.

However, it should be noted that both of the above EU regulations went through the ordinary legislative procedure at EU level which would have included widespread consultation with interested parties including the Member States, Advisory Councils, NGOs and the fishing Industry. The matter has also been discussed at industry liaison meetings over the years. The EU regulations on this matter are highly prescriptive in relation to licence holders ,leaving little room for further negotiation.

I should also advise that the delay in implementing this system is of concern to the EU Commission and infringement proceedings against Ireland for non-implementation of the EU points system have commenced. Ireland received a letter of formal notice under infringement proceedings from the EU Commission on 17 May 2018 in this regard. I anticipate that our response to that letter will issue very shortly and, as I have done to date, will continue to fully engage with the Commission throughout the currency of these proceedings.