Britain's royal family have gathered in London to celebrate the christening of Prince Louis, the youngest child of the Duke and Duchess of Cambridge.

On their way to the service in the Chapel Royal at St. James' Palace, Prince William walked hand in hand with the couple's 4-year-old son George and 3-year-old daughter Charlotte, while Kate Middleton carried a sleeping baby Louis in her arms.

Louis, who was born on April 23, was dressed in a cream christening gown which is a replica of the robe made for Queen Victoria's eldest daughter in 1841.

As the Archbishop of Canterbury greeted Kate, she could be heard describing Louis as "very relaxed and peaceful" adding, "I hope he stays like this."

Queen Elizabeth II and the Duke of Edinburgh, Prince Philip, were not in attendance, with the decision understood to not have been taken on health grounds, but to have been agreed upon some time ago.

The Duke and Duchess of Sussex, Prince Harry and Meghan Markle, were among the guests at the ceremony, marking Meghan's first royal christening. Neither will serve as godparents to Louis, with six of William and Kate's friends and other family members being chosen instead. 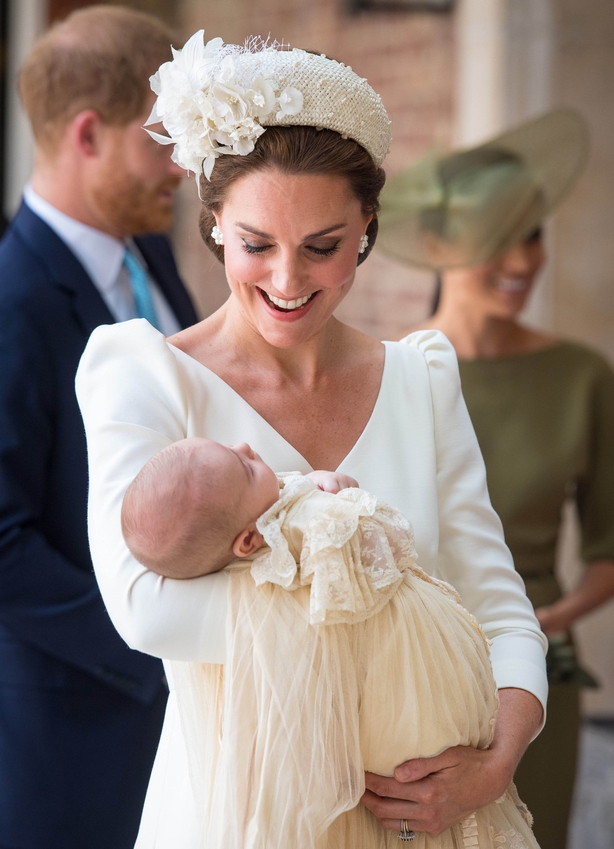 Louis's grandfather the Prince of Wales, step-grandmother the Duchess of Cornwall and maternal grandparents Carole and Michael Middleton were also there for the big day alongside Kate's brother James Middleton, her sister Pippa and Pippa's husband James Matthews.