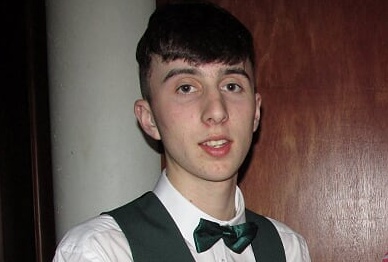 Sean Devenney from the North West Snooker Club Letterkenny will be making the long journey to Jinan city in China this Sunday, to compete at this years U18 and U21 World snooker Championship.

Sean,  one of the county's top players, has reached four Irish Finals in a row and is ranked no.2 at U18 level.

He has been a successful member of the Irish Junior squads for the last five years and is also a member of the undefeated Northwest Premier A team who did the League and cup double in the NWASA in Derry this year, recording this years high break of 126 also.

He was crowned Pairs champion when he partnered Johnny Connors and was runner up this year in the Donegal Championship.

Sean has being preparing for this championship since the start of May and most days can be found honing his skills in the club on the Port Road for four to five hours.

This is his second time playing in a World Championship and was unlucky to be beaten in the knockout stages in Belgium two years ago by Chris Totten from Scotland 4-3.

December 8, 2021
The Nine Til Noon Show with Greg Hughes - Weekday's 9am til 12noon Magazine type mid morning chat show providing a forum for listeners to...