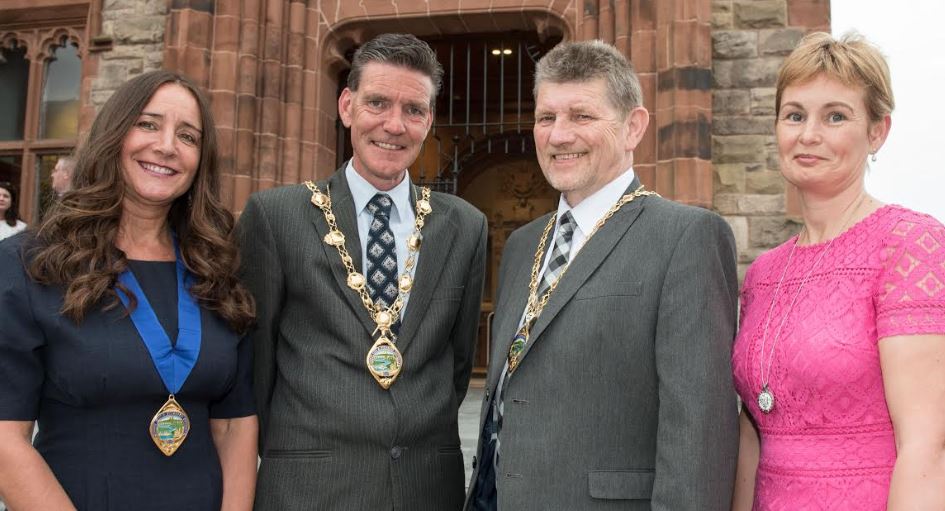 The new Mayor of the Derry City and Strabane District Council is SDLP Councillor John Boyle, who was electd at last night's AGM in the Guildhall.

Derry City and Strabane District Council tonight elected a new Mayor to represent the City and District for the incoming 2018-19 year. The SDLP’s Councillor John Boyle accepted the Mayoral chain from his predecessor Cllr Maolíosa McHugh at the Council’s AGM tonight in the Guildhall.

The new Mayor will be supported in his role by Ulster Unionist Alderman Derek Hussey who takes up the position of Deputy Mayor.

As he handed over the Mayoral chain and reflected on his busy year in office, Cllr Maolíosa McHugh extended his thanks to the people of Derry and Strabane for their friendship and hospitality over the past year and extended his best wishes and good luck to the new incoming Mayor.

Newly elected Mayor, Cllr John Boyle, said he was deeply honoured at being chosen as Mayor and promised to serve all the people of the City and District “with integrity and honesty, regardless of their religion, class, colour, sexual orientation, gender or political affiliation.”

Among the key objectives set out by the Mayor for his year ahead, was the commitment to work with elected members, Council officials and partners to progress with the delivery of the Local Development Plan and Strategic Growth Plan.

Mayor Boyle said securing a City Deal for the Council area will be top of his agenda this year. He commented: “It is my intention to continue to work towards achieving a City Deal for our Council area. A City Deal really can be a significant game changer for people here. Allowing us to have a greater degree of fiscal autonomy and to concentrate resources where we will see them best realise our potential to grow as a city and region. It is long past time that we as the North West regional capital got our fair share. Our transport infrastructure is still not up to speed and the deficit in this area must be further addressed over the coming year. Our University must be assisted in realizing our ambition to see student numbers expanded with more educational courses on offer. Key to this is the further development of the proposed Medical School of Ulster University and I welcome the opportunity to hear their plans in the coming days.”

He said he also intends to build on the work done to date to build international links and establish strong business, trade, education and tourism links in the United States, China and Europe. The expansion of the University at Magee and advancement of the Medical School as well as the further development of the City of Derry Airport were also outlined as key projects that the Mayor will be focusing on during his year in office.

The newly elected Mayor said he was committed to working in close collaboration with Donegal County Council to build on the existing relationship in the North West region and to continue with the excellent work being done to engage with those involved in tourism, culture, heritage and sports to ensure that the region’s strengths are showcased in the best possible way to assist in the regeneration of the city and district.

Announcing details of his Mayoral charity, Cllr Boyle said he was delighted to join with Foyle Search and Rescue in a partnership for the forthcoming year. “I believe that currently the work of Foyle Search and Rescue is the very epitome of the word selfless. Their dedication and sense of citizenship is an example to us all. I can think of no better way to recognize M

Outlining details of his Mayoral initiatives, Mayor Boyle said the initiatives will be focused on working towards a better understanding between communities and also reviving the city centre by looking at new and imaginative ways to develop the city centre into a place where people shop and socialise in, in a safe environment.

The Mayor added that high on his agenda was to provide support and assistance to those in most need in the community.

As Mayor, he said, he aims to serve everyone in the community equally and openly. “My door will always be open, and I will do my best to represent all the people of this area, to the best of my ability,” he concluded.