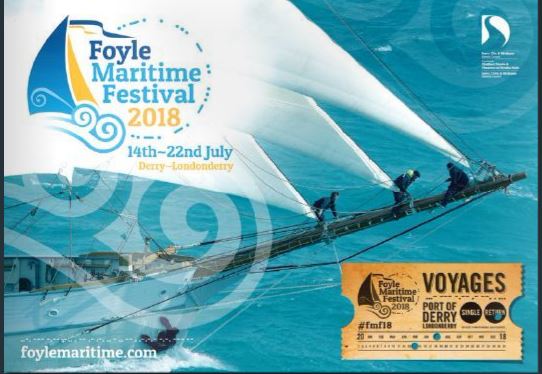 The organisers of the Foyle Maritime Festival are urging boating enthusiasts from all over Ireland and the UK to travel to the city for the festival in July.

In particular, the festival committee is seeking boats to take part in "Voyages", which it is describing as a sensational Parade of Sail and Light Show.

Fireworks and theatre are being promised on the River Foyle on the evening of Friday July 20th, with light kits being provided to all sailors.

Ahoy there, sailors! Boating enthusiasts wanted to be part of something spectacular this summer in a sensational Parade of Sail and Light Show – “Voyages”

Fireworks and theatre on the River Foyle in Derry-Londonderry will illuminate the night sky during the evening of Friday 20th July and boat owners from around Ireland and the UK are being urged to sign up to join in this unique extravaganza.

It will be a key part of the Foyle Maritime Festival 2018 which will see a host of activities both on and alongside the stunning river setting entertain up to 160,000 people from 14th- 22nd July 2018. A jazz catamaran, visiting Tall Ships, a seafood festival and an artisan market will surround the arrival and stopover of the Clipper Round the World Yacht Race Fleet in Foyle Marina.

Sailors are invited to moor their boats along the Quay to add to the carnival atmosphere and they will be provided with a simple light kit to dress their vessel during their stay and join in the magical showcase on from 9pm – 11 pm.

While here, they will get the chance to chat to competing Clipper Race crews, skippers and race teams as well as have the opportunity to see around the incredible racing boats or even have a sail along the River Foyle on one of the racing yachts.

A range of visiting boats and Tall Ships will also be berthed along the Quay for the duration of the Festival, which this year is based around the theme of ‘Voyages’, making it the dream setting for sailing families seeking out the ideal destination this summer.

The highlight will be the Parade of Sail and Light showcase involving hundreds of performers on land, air and water entertaining thousands of festival visitors watching spellbound from the riverside.

The Mayor of Derry City and Strabane District Council, Councillor Maoliosa McHugh, is encouraging anyone with an interest in boating to come on board. He said: “We want to see as many sailing vessels as possible take to the water on the night of July 20 to join in the Parade of Sail and Light which will be a Foyle Maritime Festival highlight. The event will showcase our magnificent River Foyle with dramatic performances on it, above it and beside it, spectators will be in awe.

“This is a fantastic opportunity to be part of an amazing event on the river which has been at the heart of so much of our history and continues to be central to the city and beyond.”