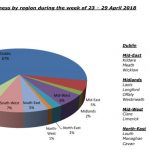 There were 30 people homeless in Donegal last month, up 4 compared to figures from March. That's a rise of 15%.

Across the whole Northwest, 59 people, 30 in Donegal and 29 in Sligo, registered as homeless during the period 23rd - 29th April, representing 1% of national figures with a total of 5963 people presenting as homeless across the country.

The latest figures published by The Department of Housing, Planning and Local Government show that during the week of 23rd - 29th April 59 adults were recorded as homeless in the North West region, equal to figures from the period 19th – 25th March.

During the same period, in the region 3 families presented themselves as homeless, comprising of 4 adults, 2 of which were single parent families and a total of 8 dependents.

December 8, 2021
The Nine Til Noon Show with Greg Hughes - Weekday's 9am til 12noon Magazine type mid morning chat show providing a forum for listeners to...