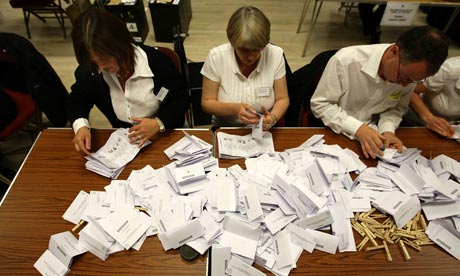 The first exit poll in the abortion referendum suggests Ireland has voted overwhelmingly to remove the 8th amendment.

The first exit poll after ballot boxes closed shows a landslide victory for the Yes side in the abortion referendum.

The Irish Times/Ipsos MRBI of 4,000 voters today shows 68 per cent in favour of repealing the 8th amendment, and 32 per cent against.

The margin of error is plus or minus 1.5 per cent.

It shows an overwhelming Yes vote in Dublin where 77 per cent of people were in favour of repeal.

The rest of Leinster and Munster have voted 2-1 in favour of repeal.

In Connacht/Ulster, which most people expected to vote no, it was 59 per cent in favour of repeal.

The poll suggests over 65s were the only age group to vote No, with a massive 87 per cent of those aged 18 to 24 voting yes.

Women were also massively in favour of altering the constitution, with 70 per cent saying there needs to be change.