Plans to twin Letterkenny with the German town of Rudolstadt are at an advanced stage, with a formal proposal likely to be discussed at the May meeting of Donegal County Council.

Municipal District Mayor Jimmy Kavanagh and Cllr Michael Mc Bride both visited the town in March for St Patrick's Day celebrations, and signed an informal agreement with the local mayor to pursue the twinning option. 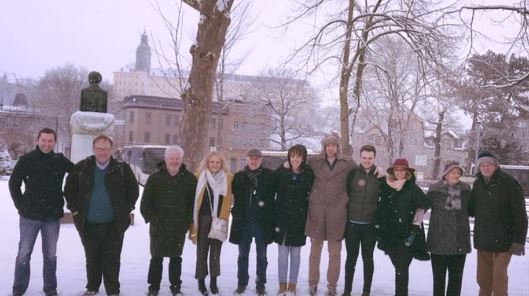 Cllr Kavanagh says the issue will come before the council's Corporate Policy Group later this month, and assuming agreement is reached there, it will go straight to the full council.............

Pic - Mayor Jimmy Kavanagh and Cllr Michael Mc Bride in Rudolstadt with a number of Donegal and Germany based musicians and artists. Courtesy of Trudy O'Donnell.