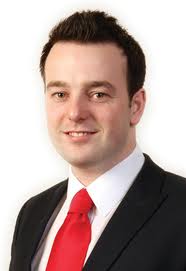 SDLP Leader Colum Eastwood has revealed that he will meet the British and Irish Governments this week to present a case for the establishment of a North-South Structural fund using monies from the "Loans to Ireland" payments.

The loans are estimated to be worth 3.2 billion pounds.

The Foyle MLA said he believed from previous discussions with An Taoiseach and the British Prime Minister, that the governments would be interested in exploring the possibility of the so-called "Border-Bank", that could be used as an economic lever for the border areas, against Brexit.

In previous seperate meetings with Taoiseach Leo Varadkar and UK Prime Minister Theresa May, SDPL Leader Colum Eastwood raised the need for both governments to agree to use the Loans to Ireland funds to support the border areas north and south.

This week, he is set to take a step further by presenting both governments with a plan for how some of the repayments from the Loans to Ireland from the British Treasury, could be used instead to channel funds into cross-border development in sectors set to be particularly challenged by Brexit.

According to Mr Eastwood, his moves this week will test the commitment of the British and Irish governments and said has said "It's time for radical change and real partnership that delivers".