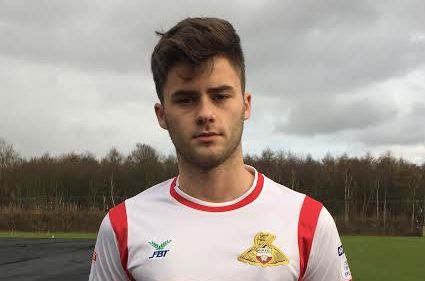 The 18-year-old Letterkenny lad was on Doncaster’s radar for sometime and following negotiations, the former Illistrin Schoolboy F.C. player signed a two and a half year contract on Monday in Doncaster.

Defender Blaney who will turn 19 this Saturday is hopeful a switch to full-time football will pay dividends after starting training with his new team-mates yesterday.

Blaney said: “The aim is just to get as fit and strong as I can using the facilities here and put in the hard work. If I keep working hard I can eventually get into the first-team. “I’m working with the fitness coaches now, then hopefully I can get a few games for the Development team and show the manager and the lads what I can do.”

Blaney acknowledged the significant part that Finn Harps F.C. had played in the development of his career over the past couple of seasons. “They played a big role after going from my schoolboy club Illistrin. Finn Harps was a big step up as I was going to play in the League of Ireland.“The coaches there, Joe Boyle and Declan Boyle the U19 and U17 managers as well as the Finn Harps senior manager Ollie Horgan, were all brilliant with me and I can’t thank them enough.”

The Doncaster Rovers manager is Darren Ferguson son of the legendary Manchester Utd boss Sir Alex Ferguson. “I’m very happy that Shane is now joining us here at Doncaster. We have been watching his progress at Finn Harps and have had him over here a couple of times. Shane wants to take his football career to the next stage so the coaching staff and management here are very much looking forward to helping him realize his ambitions with us at Doncaster Rovers. Our Chief Executive and the Chairperson would like to thank Finn Harps for their help in the negotiations and it’s refreshing to see a Club that wants to see players like Shane progress in their careers” Ferguson said.

Finn Harps boss Horgan is happy that the youngster is getting his big opportunity to test himself with the English League 1 side. “Shane has been over for trials with a couple of clubs and it’s great now that the breakthrough has come for him with Doncaster Rovers. It’s a great opportunity for any young lad to get and I and all at Finn Harps want to wish him the very best in his ambition to make a career as a full-time professional footballer” Horgan said.
Finn Harps Secretary John Campbell said the club was very pleased with the way negotiations went, that has led to a deal being agreed so that Shane’s transfer to Doncaster Rovers could be finalised. “Shane Blaney’s a great lad and we’re happy with the way things went in recent days in our dealings with Doncaster so that the transfer from Finn Harps could be completed for the lad to sign yesterday. I have been in regular contact with their manager Darren Ferguson and would like to thank him and Doncaster Rovers for the manner in which they conducted their side of the negotiations. Darren’s happy that the two clubs were able to agree a deal that allowed the transfer to be completed. On behalf of the Board of Directors I want to wish Shane good luck in the next stage of his career and hope that things work out for him in the professional game” Campbell said.