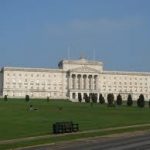 It's being recommended members of the North's power-sharing assembly take a pay cut - because it's not been functioning since January.

Former Assembly chief executive Trevor Reaney has recommended pay is reduced in two stages to around three quarters of the current 56-thousand euro.