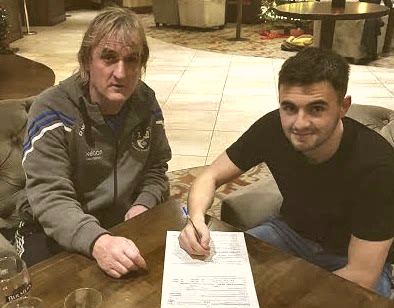 The 23-year-old midfielder joined Harps in July from Derry City and scored on his debut in the 3-2 away Premier Division win over Bray Wanderers at the Carlisle Grounds.

“It’s good for us to get terms agreed with Mark. He will be a key player for us in the First Division and hopefully it’s another opportunity for Mark to show his ability in that wide midfield role that he normally plays. His decision to sign along with Paddy McCourt, Ciaran Coll, Aidan Friel and Ciaran O’Connor is very positive for Finn Harps and we’ll keep working on getting more players in ahead of pre-season next month” Horgan said.

Mark Timlin started his career with his local club Buncrana Hearts before signing for English club Ipswich Town in July 2011.

After 3 seasons with Ipswich reserves scoring 10 goals in 35 games, Timlin's contract came to an end and he made the move back home to join Derry City.

He started 18 league games over the season and became one of City's main men in the 2015 League of Ireland season as they were dragged into a relegation battle in the last third of the season.

Mark finished the season as Derry's top goalscorer with 10 goals in the league from 28 appearances. Timlin attracted the interest of other clubs and opted to sign for St Patrick's Athletic in November 2015 and finished up the following season with 10 goals in 37 games in all competitions, winning his first senior medal as Pat’s lifted the 2016 League of Ireland Cup.

Timlin returned to Derry City at the end of November 2016.