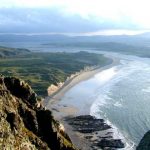 The film features a number of locations along Ireland’s western seaboard., including Malin Head and Skellig Michael.

“The fact that another Star Wars film was shot on location along the Wild Atlantic Way is truly a fantastic coup for Irish tourism,” said Niall Gibbons, CEO of Tourism Ireland. “The Last Jedi is bringing our magnificent scenery to the attention of millions of people around the world. It’s a fantastic way to significantly boost awareness of the Wild Atlantic Way – and Ireland in general – and presents Tourism Ireland with a superb opportunity to highlight Ireland in 2018.”

Tourism Ireland’s promotional campaign will roll out in 15 markets – Britain, the United States, Canada, Germany, France, Spain, Italy, the Netherlands, Belgium, the Nordic region, Australia, New Zealand, Japan, India and the GCC. Tourism Ireland will share the film with its 20,000 international media contacts; and via social media, including YouTube, Facebook, Twitter and Instagram.

Tourism Ireland will launch the next phase of its Star Wars campaign on 27 December, targeting fans of the science fiction franchise everywhere.