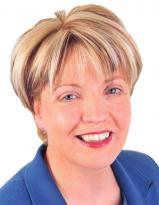 A former Tanaiste has described comments made by Lord Kilclooney about Donegal as 'nonsense'.

John Taylor, now Lord Kilclooney, says Donegal has been forgotten by the Irish Government and has suggested that the County would be better off being part of the UK.

Speaking at Bank of Ireland's Women in Business event in Letterkenny, former Tanaiste Mary Coughlan says while relations between Donegal and Northern Ireland are strong, Donegal very much belongs in the Republic: